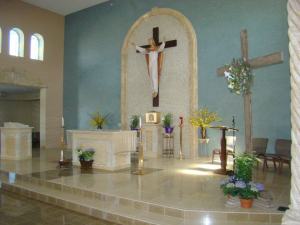 Some History of St. Thomas the Apostle Church before 2012 Church Renovation

The first collection yielded $9.00, not too hard to believe when you consider there were only 504 people of all denominations on the island.  In the next few years things began going downhill, mainly because of the Great Depression that gripped the world during the Thirties.

The first pastor of the mission church, Msgr. William T. Dittrich, managed to conduct mass until 1932 when he was succeeded by the Rev. Thomas Whelan.  Both priests died in 1934.  The Rev. John J. Henry, pastor of Holy Spirit, took charge on November 2, 1934.  Two years later the Diocese of Trenton and Holy Spirit Parish paid off the original loan of $25,000, and shortly after, the church building was taken over by the Federal Government in an attempt to liquidate the construction funds invested by banks.

During the 1930’s and early 40’s the closed building endured many indignities, including use as a horse stable for US Coast Guardsmen standing submarine watches.  In the meantime Catholics on the island traveled to Holy Spirit in Atlantic City, causing some parishioners to speculate whether it would be more practical to have one priest travel to Brigantine than a hundred or more families drive to Atlantic City.

Someone must have been listening because in 1947, the bishop of the newly established Diocese of Camden, the Most Reverend Bishop Bartholomew J. Eustace, requested Father Henry to renovate the dilapidated building.  Contractor Raymond A. Prendergast did the work for $30,000.  The first mass was held on the first Sunday of July 1948.  The altar boy was Joseph DiLascio of Holy Spirit Parish.  There were no pews.  Some 200 portable seats were provided and over 400 people of all denominations filled the chapel.  The trustees were John Shellem and Joseph Buckley, the then chief of Brigantine Police.  Members of the first Mission Holy Communion Class in Brigantine were Edward and Glenn Sorenson, Robert Fields and George Kuhl.  The nuns assisting Father Henry with catechism classes were Sisters Mary Joachim, Mary Victoria and Mary Emannuel.  By 1950, 35 children were enrolled in the classes.   As the number of mission families grew, the church debt was reduced to $12,000.

By 1956, the building’s seating capacity of 200 proved inadequate.  Architect Joseph G. Carchidi of Trenton drew up plans to lengthen the church by 50 feet and provide a seating capacity of 520.  This brought the church debt up to $70,000.  At the time, the size of the chapel was roughly the length taken by the three large stained glass windows.  During the work of enlargement (where the altar and sanctuary now stand) masses were held at the then Hotel Brigantine through the courtesy of its owner, David Josephson, whose charity included providing a special public address system to enable the priest to be heard in the large ballroom.

The first mass was said in the church on Palm Sunday, 1957.  During the following weeks work continued, including the installation of pews as well as many of the church furnishings.  A rose and white Italian marble altar was the gift of Francis X. Horstman and was erected in memory of his brother.  The two side altars were donated by Mr. and Mrs. Joseph Hadik.  The candle sticks were the gift of Mr. and Mrs. Jerome Miller, and the three altars were given in memory of the Carroll Miller family.  The large crucifix over the main altar was the gift from Monsignor Henry.  The names of all donors were inscribed on parchment and placed under the tabernacle (these names are now located in the current new altar under the marble).  In all some $18,000 was raised for the church furnishings, including the altars and organ.

In May 1977, the church again took on a new look.  The large rose marble altar which stood in the sanctuary was turned into two smaller altars – the altar of repose where the tabernacle once stood on the back wall and the altar of sacrifice where mass was celebrated.  Above the tabernacle a natural wood canopy was erected, topped with red tiles complementing the church’s Spanish mission style architecture.  The large stain glass windows were also installed at this time.  The back of the sanctuary was faced with red brick, together with the red brick wainscoting around the church walls.  The work cost $175,000 and was supervised by the pastor, Msgr. Augustine Seidenberg.

Architectural firm for the work was Karlberg and Moran of Pennington, which also designed Holy Spirit High School.

In the mid 1980’s, under the spiritual leadership of Msgr. Lawrence Boyle, the church hall was constructed.   What a wonderful new addition to the parish.  Hospitality Sunday and overflow masses during the summer months became possible and enjoyed by parishioners.  More social events were able to be planned which helped St. Thomas Parish grow in families.  By the 1990’s, more than 1800 families were registered at St. Thomas Church!

In 2010, Fr. Bill Vandegrift became pastor of St. Thomas the Apostle Parish.  With his pastoral leadership and business insight, Fr. Bill organized a building committee to oversee a major renovation project to the hall and church.  Brindisi Builders and architect Walter Olt were awarded the contracts for construction.  By May 2011, the hall had been enlarged and fully renovated to accommodate 300 people, and by Easter 2012, the church was renovated and refurbished with new church furnishings.

The Most Reverend Bishop Joseph Galante consecrated the new altar.

Some Names and Dates:

During the construction Father O’Doherty had a reminder for parishioners.  “naturally, “ he said, “we are all interested in the progress of the work….but the less interference with the men while they are working, the sooner the job will be finished.  Every mechanic likes to stop and talk about his job.  This delays the work 15 to 20 minutes for each person.  Look, observe, and enjoy…  but don’t slow up the work!”  The school opened in September 1963.  That December, 464 people attended the first Christmas party in the new hall.

Students back then remember fencing placed around school entrances  –  not to prevent snow drifts but to block wind-driven sand.  In 1963 the south end of Brigantine had very little construction and 41st Street was open to the ocean.